You are here: Homepage 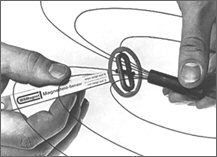 A small magnet and the needle of a
compass follow the magnetic flux lines.
(IBS Magnet field sensor Type MK II)
The magnetic flux lines of the geo-magnetic field radiate from the surface of the globe in different angles relative to the polar axis.
The flux lines surrounding permanent magnets also have a curved course on their flow from South to North Pole. Since the inclination of a small rod magnet follows those flux lines in the same way as the needle of a compass, we can see the pattern of a magnetic field with the field sensor, Magnaprobe MK II. This applies to the extension of the field as well as to its direction.
Magnetism is a mysterious force. We can neither see nor feel it. Our senses do not perceive magnetism.
Magnetism has been known to mankind for millennia. The nautical compass with a steel needle has been in use since 1250 BC.
Magnetism has continually inspired technicians and scientists to invent new applications. The newest generation of high-energy magnets made of rare earth metals has made many more technical applications possible, e.g. the magnetic levitation railway.

Opposite poles attract each other

Equal poles repel each other